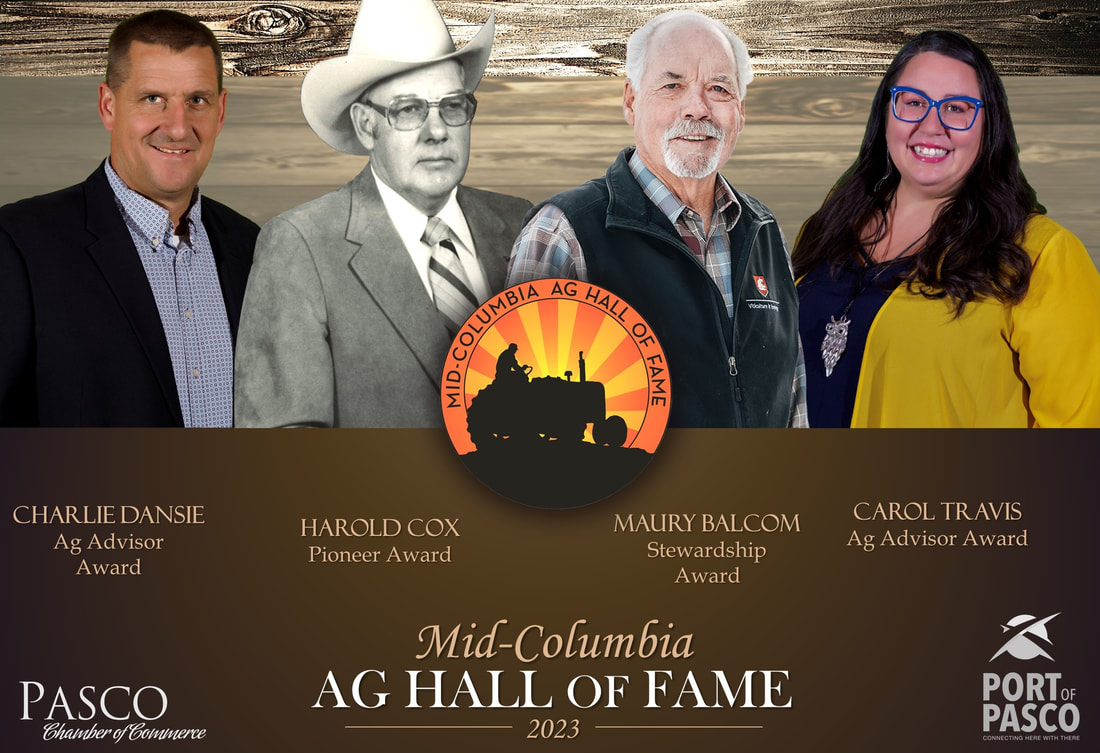 The 2023 inductees to the Mid-Columbia Agriculture Hall of Fame will be honored at a dinner and installation gala at the Pasco Red Lion on Thursday, January 19, 2023, presented by the Pasco Chamber of Commerce and the Port of Pasco.

The Mid-Columbia Ag Hall of Fame Pioneer Award honors individuals who have had a significant influence on the development of agriculture and unselfishly served their communities. This Year the award is bestowed on Harold Cox.

Harold Cox devoted a lifetime to always “getting the job done” through his work in farming, ranching and community service. Growing up on a family farm in Outlook, WA raising potatoes, rutabagas, turnips, sugar beets, hay and livestock was the foundation he would count on for the success he accomplished later developing his own farming and ranching interests. “You always, always make your goal, plan three steps ahead, figure out all the downsides, and then give it all you got! Never go halfway. Don’t ever give-up ‘til the job is done” Cox is known to have said. Harold served on numerous boards and commissions including Paterson School Board, Franklin County Planning Commission, President of both the Washington State Cattleman’s and Washington Cattle Feeder Associations, WA Association of Wheat Growers, WA Ag Forestry Leadership Foundation, Tri-Cities Cancer Center Executive Committee and the Benton-Franklin Fair and Rodeo 4H & FFA Market Stock Sale.

The Agriculture Advisor Award is given to an individual who has had a significant impact in ag-advancement and educational programs and similar organizations influencing the industry through leadership, guidance and community involvement. This year, we have 2 inductees. Charlie Dansie and Carol Travis.

Charlie Dansie has helped grow the Connell High School Agriculture Programs to one of the most successful in Washington State.  His innovation and dedication led to the development of the Commercial Driver’s License (CDL) curriculum course and Connell High School and has become a model for other schools to emulate and offers his help to walk with them through the process.  Charlie is a true agriculture promoter and motivator to his students.  Consistently, there are over 100 FFA members annually and he guides his students to numerous state and national competitions. He also brought ‘Drive your Tractor to School Day’ to Connell, bridging the gap between school and community.

Carol Travis’ enthusiasm, dedication and success as a teacher have been recognized by other organizations in the community of agricultural educators.  Her pathway to educating took an unconventional path by way of a floral manager at Yokes in Airway Heights and Pasco. She was named Volunteer of the Year at the Pasco Yoke’s due to her dedication and willingness to assist with community events.  This lead to her realization of her desire to teach. She became certified and started the brand-new agriculture program at New Horizons High School in 2010.
​
The Stewardship Award is presented to someone who has served the community and displayed leadership in agriculture over a long period. Maury Balcom of Pasco will receive the honor for 2023.

As a third-generation farmer, Maury Balcom has been passionately involved with preserving water resources as the lifeline to agriculture in the Columbia Basin for nearly 5 decades. He was a founding board member for the Washington Wine Commission and has served as a board member for many organizations including the Washington Wine Growers Association, Washington State Water Resources Association, and TRIDEC and still serves on the South Columbia Irrigation District Board of Directors as President since 2002.  In 2010, he was awarded the Water Resources Leadership

The Agriculture Hall of Fame Gala will be held on Thursday, January 19, 2023, at the Pasco Red Lion, starting with a social hour at 5:00 p.m. A full-course dinner will feature local produce and local wines. For reservations and information visit www.pascochamber.org, call the Pasco Chamber at (509) 547-9755 or drop by the office at 1110 Osprey Pointe Boulevard, Suite 101, in Pasco.